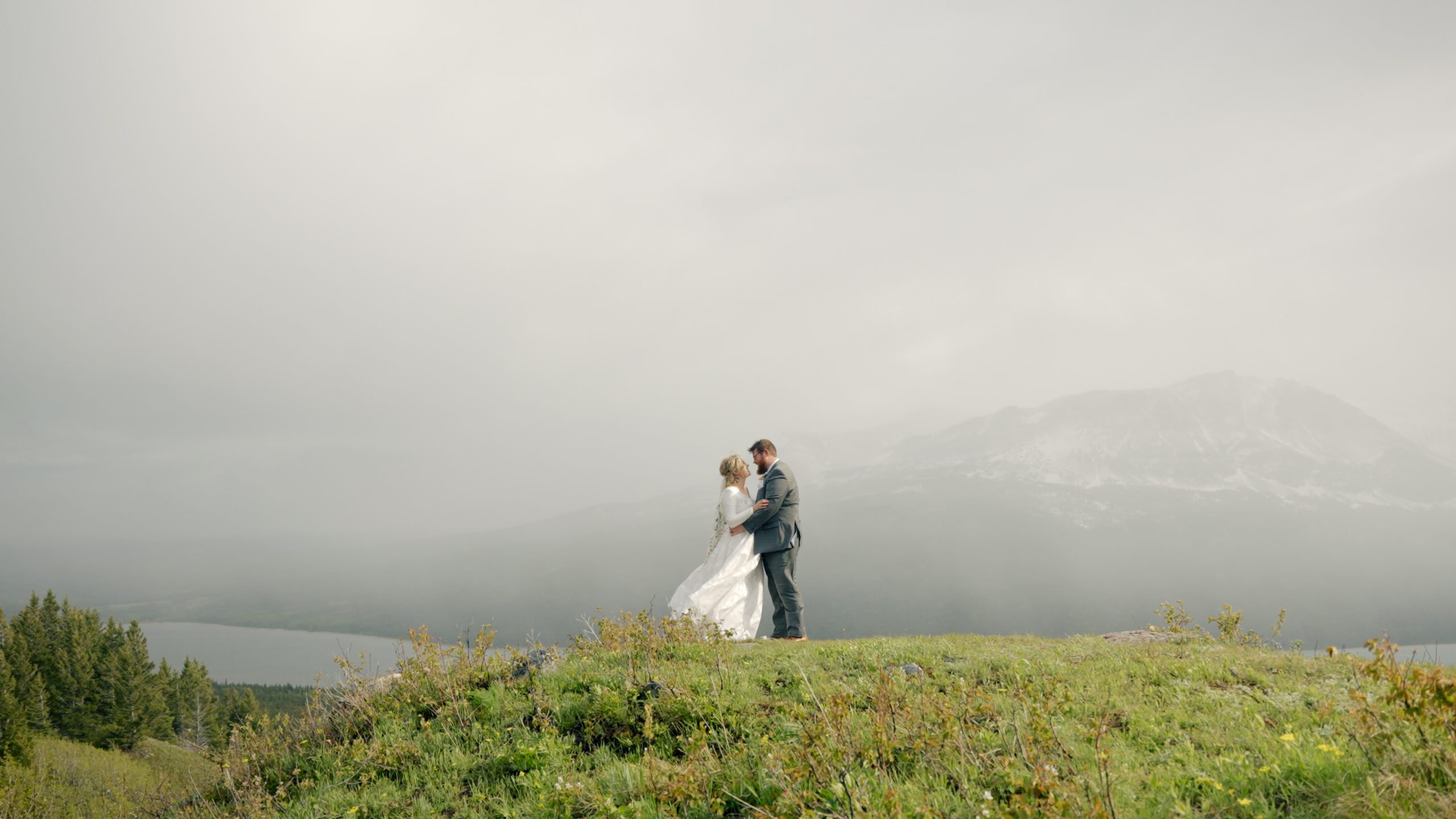 Where to Elope in Glacier National Park (Montana)

All the best spots marry the love of your life

To start, Glacier National Park is HUGE. We can barely begin to direct you toward a selection of incredible spots to elope in GNP. But we are sure as hell going to try! This national park is known for its breathtaking views and well, it certainly doesn’t disappoint! We will give full disclosure up front that we had a bit of an unusual experience during our visit. We experienced late mountain snowfall and what was called an “atmospheric river” which to be honest sounded like a made up joke except that when we looked out of our cabin window, it really couldn’t have been described any other way (lol, we laugh now but it was definitely disappointing at the time to say the least).

Along with the weather being a significant factor at play, you need to be prepared to purchase passes that allow you into the park as they are very limited (more so in the peak months). This includes the actual park pass (good for 7 days) but also the newer road passes to certain areas of the park such as Going to the Sun Road, the main highway through the park. All of that aside, we were still really lucky to have gotten pockets of sunshine and have our passes prepared which allowed us a time to really enjoy a lot of what the park had to offer! Below we’ve outlined a few amazing places to elope: 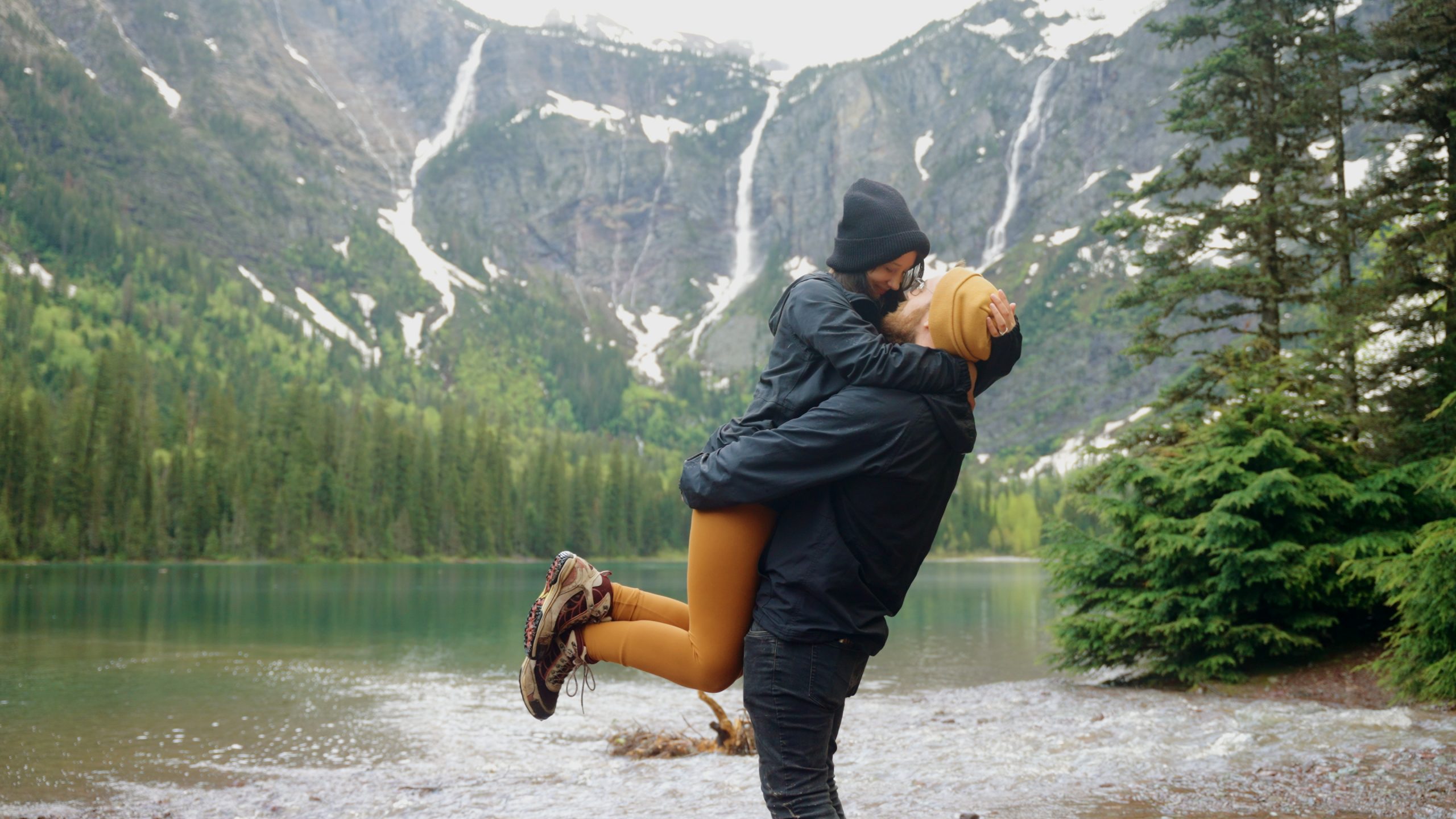 We’ve been to some incredible places in this big beautiful country. Avalanche Lake tops the list of most epic views. It’s hard to put into words just how majestic the distant cascading waterfalls off the mountainside and into the lake are, so we’ll let you view the photos and stare in awe along with us. The trail to Avalanche is located off of the Going to the Sun road, so make sure you get your pass secured. The hike to avalanche lake is an elevation gain of about 760ft and roughly 30-45 minutes to the top passing along a roaring river and through a moody evergreen forest.

If you’re open to throwing that dress train over your arm or simply carrying it up and changing, you are going to go get some of the most incredible photos + video footage possible. We actually did see someone carrying their dress up the trail on our way down as well as witnessed an engagement while at the lake (we had to stop and offer a picture!). All in all, it was a crazy beautiful spot. We hiked up and arrived while it was dry and experienced spotty rain ending with a pretty solid rain that endured through our hike back down. During that time though, we felt like we were in another world. The mist, the clear water, the ever present feeling you were being watch by a grizzly, all added to the epic experience.

Exchanging vows lakeside would be an absolute dream elopement and well worth the bit of effort to ascent up the trail. A few important notes, hiking boots are basically a must. You can always swap shoes when you get to the top, but the majority of the trail is steep, a bit rocky, and in our case very muddy. Trust us, you’ll want solid footwear. Definitely bring some water. You may want to skip the snacks unless you plan to stick around a long while. Grizzlies are common in the area and it is recommended by the park not to bring unsealed food that can attract them.  Being that this is such an incredible view, it is highly popular.

When we arrived the parking lot wasn’t overcrowded (around 10am) but on our descent we passed almost a solid line of visitors ascending to the lake. This view is incredibly worthwhile, we we definitely recommend you to get an early start on a weekday to avoid crowds and give yourself those quiet moments together with minimal interruption. The lake shore is pretty extensive so you can definitely plant yourself somewhere less traveled and enjoy the views.

One more thing to note, there is only a pit toilet at the top! Maybe bring a blanket for your creative team to hold up if you need to change? 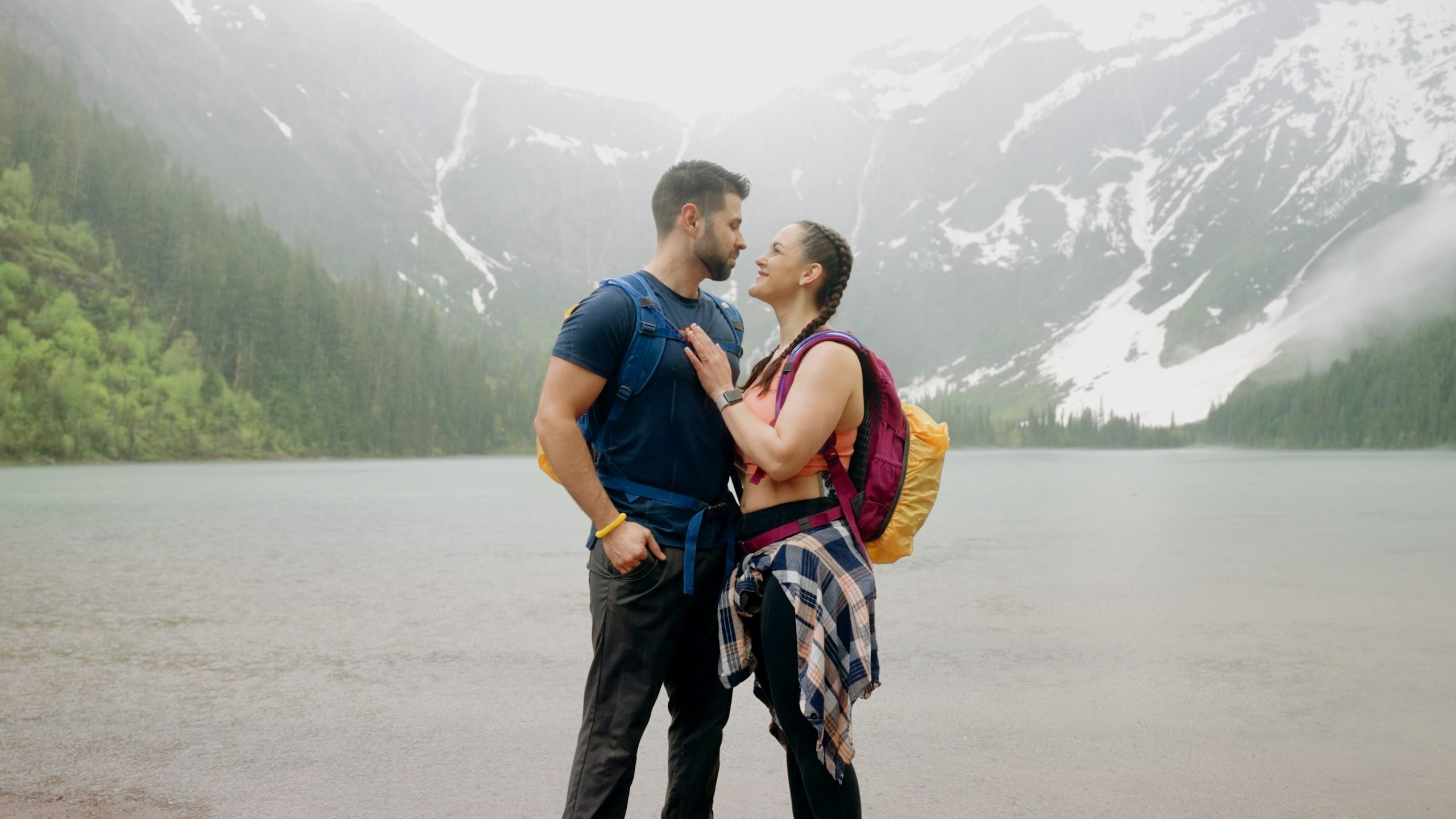 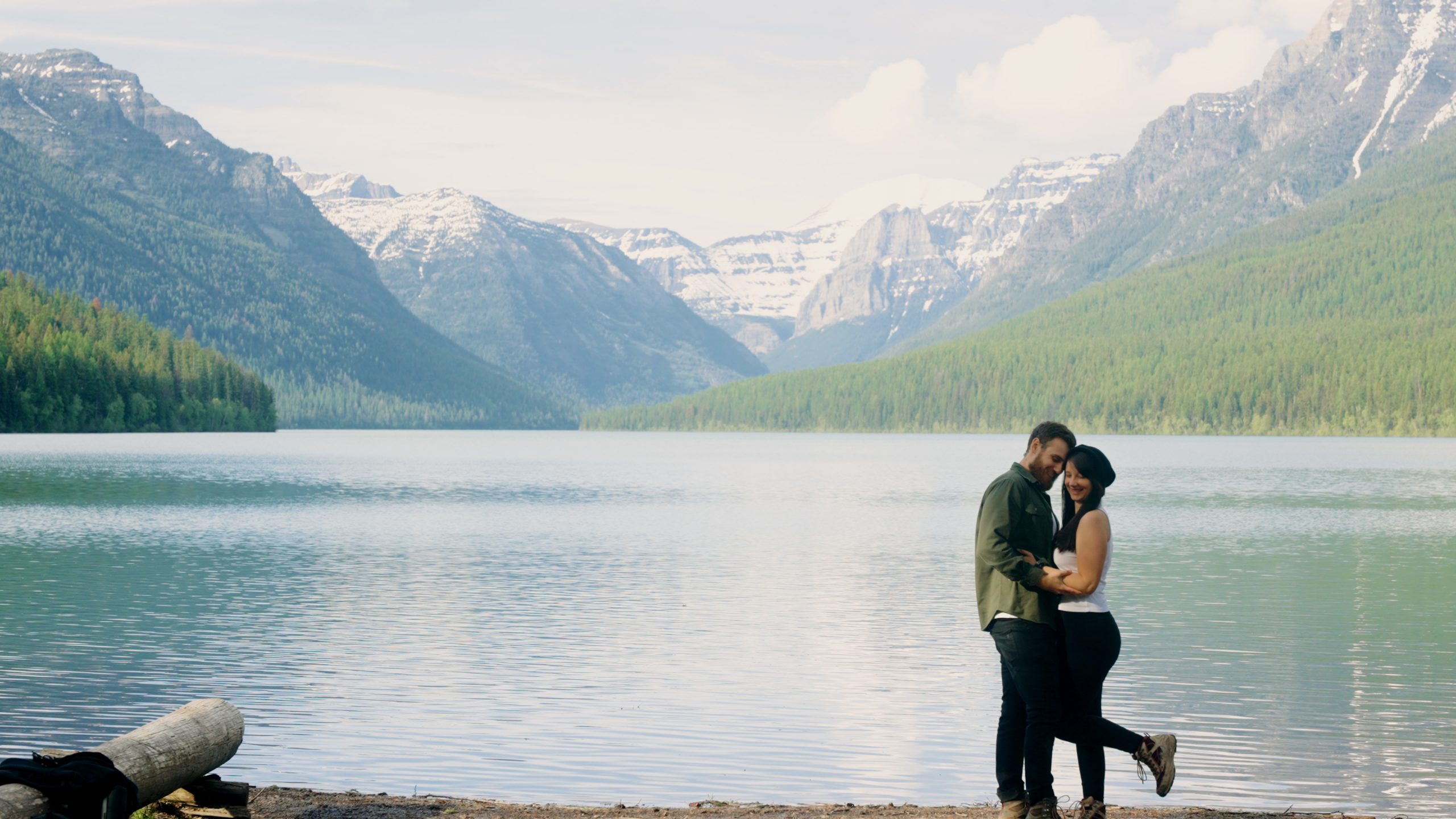 For years, we dreamed about going to Glacier. Something we discovered after arriving was that there is a LOT of misidentified locations when you simply Google Lake McDonald. Penny had an image in her head for about a decade of where she wanted to visit under the impression that it was Lake McDonald (this photo comes up directly when googled). Joke was on her, as it was actually Bowman Lake! Now Bowman, is a BEAUTIFUL view. It is basically what you would imagine when you think “mountainside lake”. Epic, magnificent, glorious, etc. There are hardly words for the beauty.

This is thankfully a fantastic reward because the journey to get there is, not to be overly dramatic, intense. First and foremost, at this time you must have a vehicle pass to access the North Fork area between 6am- 6pm where Bowman is located. Secondly, this is quite a drive from the West Glacier area, about 1-2 hours (significantly far if staying in the East, about 3-4 hours). You can camp by the lake and at a few other campgrounds or select rentals along the way, but otherwise this is a very remote part of the park.

When doing some research on getting up there we read that the road was a dirt road and a bit sketchy at times. This was an understatement. We drove to Glacier so we were in our Subaru Impreza and while all-wheel drive, what you needed for this drive was bigger tires and a car that sat higher off the road. Almost every inch of the narrow road was covered in deep potholes and it took a lot of smooth and steady driving to be able to avoid getting a flat tire. With patience and endurance, we made it! With a larger car, we may have made it with less stress, but to be honest the large vehicle who pulled over to let us pass was also struggling. There is no cell service in this area so if you do get stuck you’ll end up having to walk back down to Polebridge.

In conclusion, give yourself a lot of extra time for the drive up to go slowly and safely and you’ll be fine! Now that we’ve given you the fair warning, as we mentioned the view is incredibly worthwhile! You can park and walk right up to the lake to see the view we are discussing (which is great because you’ll have a lot of adrenaline after the drive and be glad to just be there lol). Now we actually had our GTTS road pass, but overlooked the need for the North Fork pass. That being said, we had to go through the gate after 6pm and so we were at the lake during golden hour.

It was nearly vacant except for the car that we traveled the road with and a small group that was camping in the adjacent campground. We were able to stand at the picturesque point uninterrupted to grab some photos and footage. It’s likely that due to the difficulty of access, Bowman may be less crowded anyway, but evening was definitely a great time to have arrived if looking for some privacy.

To our knowledge, you are able to take the trail around the shore of the lake as well for some new angles. You could certainly spend the whole day there, though, and not tire of that fantastic view. On the way in or out depending on the time, you could absolutely stop for a pastry and/or a drink at the Polebridge Mercantile. We had both (huckleberry of course!) and really enjoyed sitting at the picnic table, sipping drinks with the mountains towering behind us. The locals are fun and friendly and Penny would trade her left leg for another huckleberry bear claw. Having a celebratory toast after you exchange vows by the lake would be AMAZING. 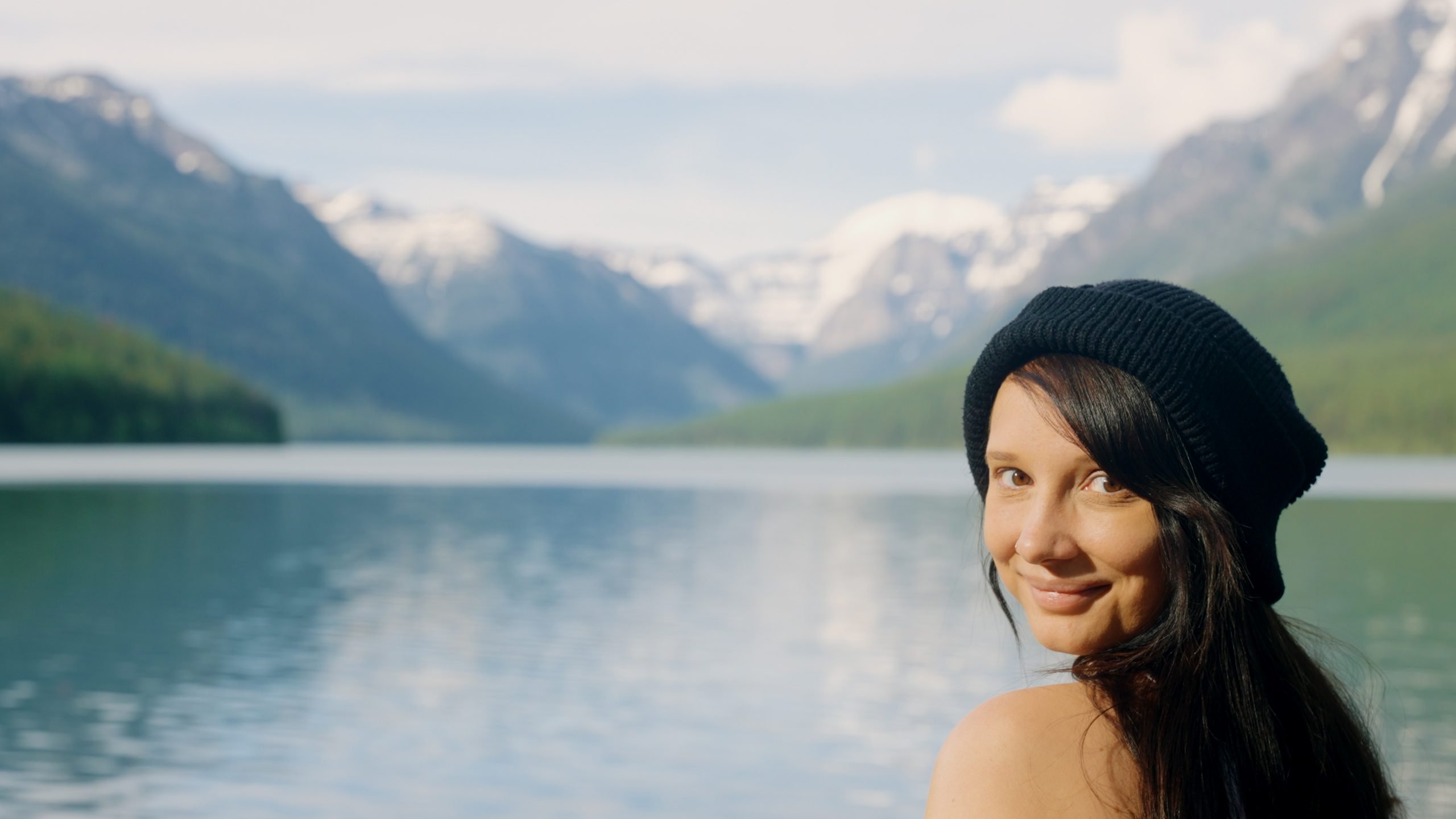 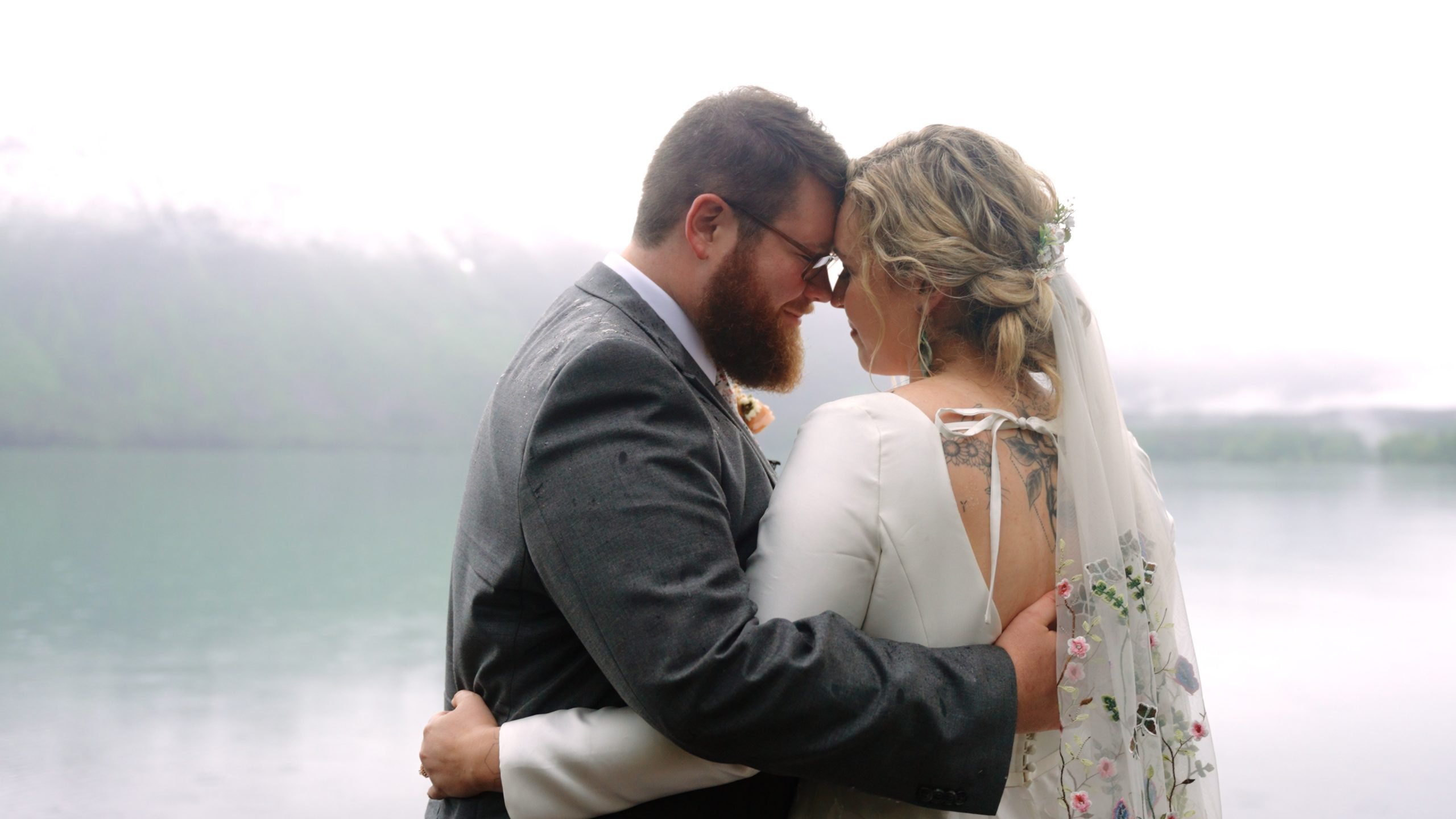 Classics are that way for a reason. Lake McDonald is one of the most famous lakes in the USA. It is pristinely clear, full of polished, colorful shoreline rocks, and has a backdrop of the forests and mountains that will make you stop and stare. We experienced Lake McDonald in more misty atmosphere, but even to the naked eye we could see the appeal. The clearest day we visited we witnessed an elopement along the shore. It is definitely popular did a reason!

Other than the pass to the park you’ll need a Going to the Sun road pass to gain access to the lake. There are many pull-off options along the few miles of winding road before you arrive at the Lake McDonald Lodge where we filmed. The land is flatter so hiking boots aren’t a necessity as in some places. Many visitors choose to stay here for the convenience and historical significance which is certainly convenient. While the lake was still breathtaking in the misty fog, we would say to shoot for the summer months (July-August) if you want to be more likely to get that clear, colorfully-pebbled background you see in photos.

Along with being a main lodging option in the park and therefore busy, you can expect a lot of additional visitors to take in the views. At sunset when we filmed, there was next to no one along the shore we planted at. Sunrise is probably also a lovely time to get those first peeks of sunshine and color without the added tourists. 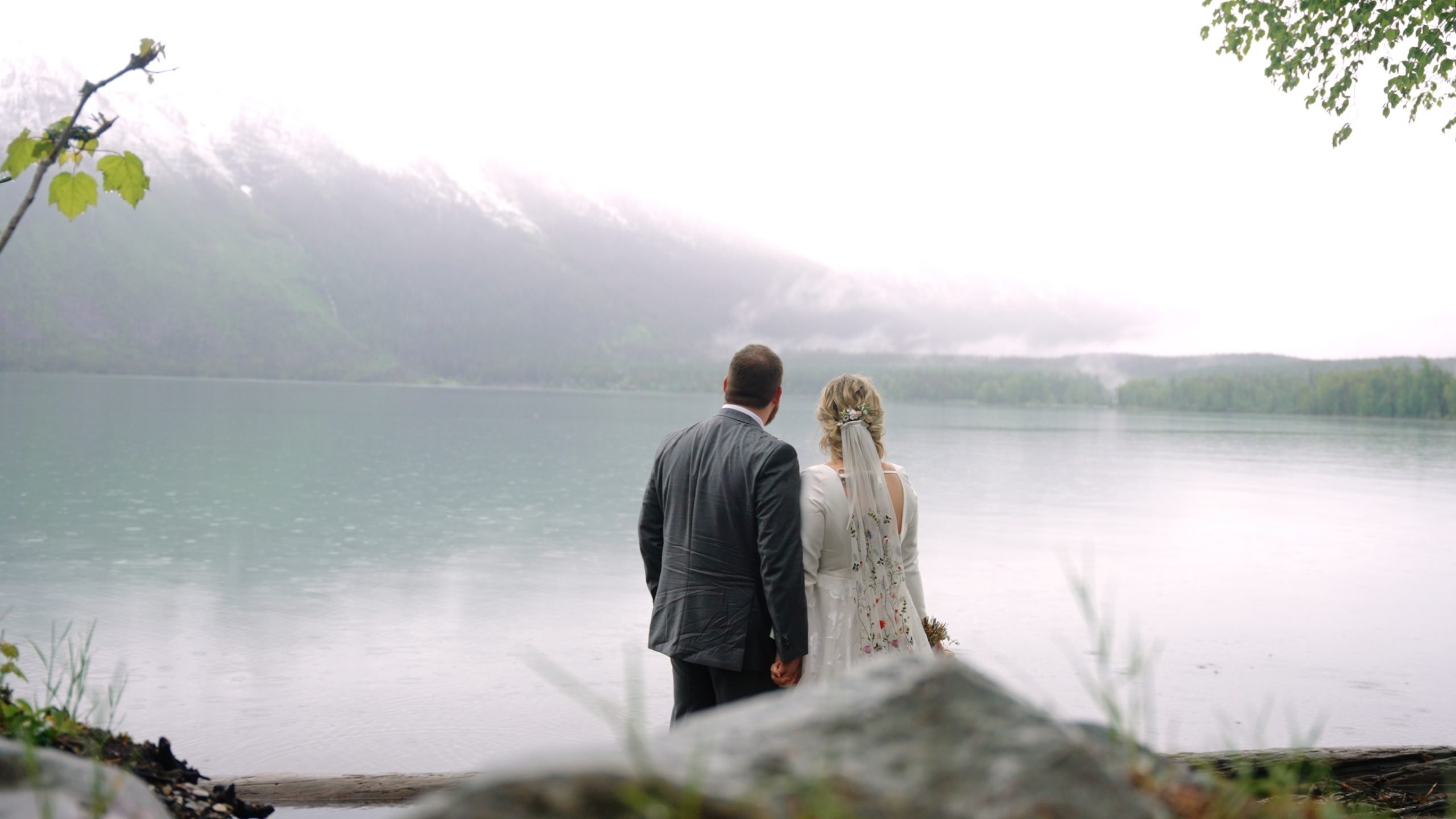 How to Elope in Glacier National Park (Montana)

Glacier is big, beautiful, and full of awe-inspiring nature. We’ve hardly scratched the surface and are so excited to go back and film for more couples! These are just three of our favorite locations, but there’s definitely a LOT more to see! Going to the Sun was not fully open during our visit and there were some other closures due to animal activity so we missed a large portion of scenery that we definitely think would be worth exploring such as Hidden Lake, anywhere on the Highline Trail, and Grinnell Lake to name a few. Something that was reinforced for us on this journey in particular was that rather than banking on one day, you may want to give yourself two days to really put effort into ensuring good weather. Going forward, when we offer destination elopement packages to epic destinations we will be guiding you on how to get the most of our your big day. One of the suggestions we will offer you is a two day versus one day booking if you are open to it. While no guarantee, you may find that the day you added is a much more picturesque day that allows us to create for you and explore with you in much better weather and/or lighting. All in all, we want YOU to have the experience you’ve been looking forward to and will do our best to create with whatever Mother Nature throws at us in the location of your dreams! It’s important to head into elopement planning with the possibility that nature may not cooperate and that you must, for lack of a better phrase, embrace some chaos, and enjoy this special day no matter what. Be sure you shape your day not only around your adventure, but around the little things too like enjoying a huckleberry pastry together on your way home from Bowman or having a romantic dinner at the Lake McDonald Lodge. At the end of the day, you’ll be married and we hope you’ll have had one of your greatest adventures yet! 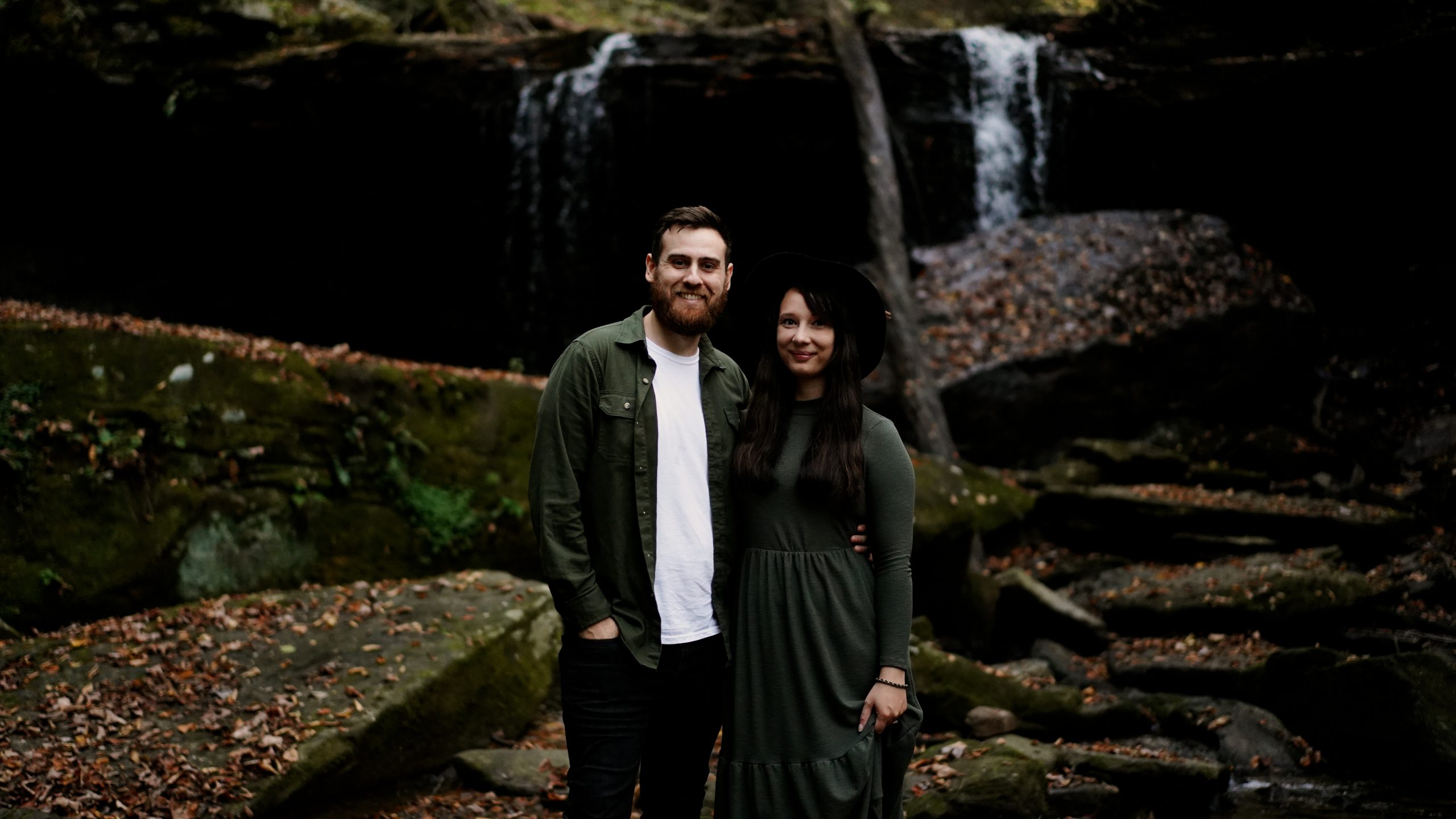 Need a photographer and videographer?

Let's chat about how to make your elopement experience the best!